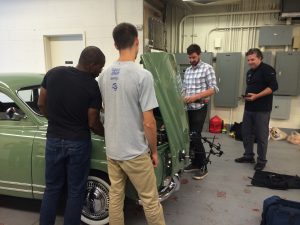 Getting the car ready 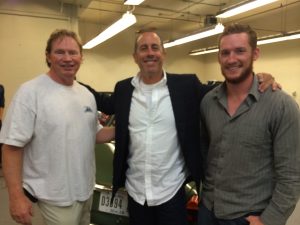 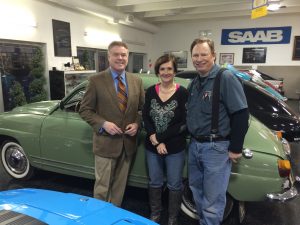 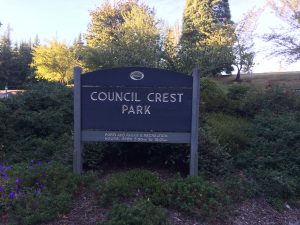 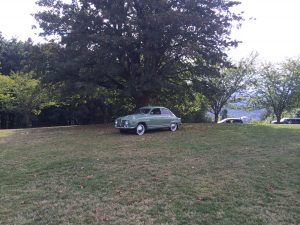 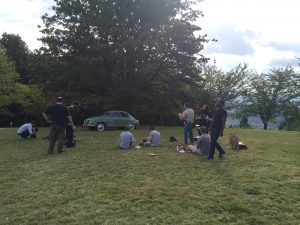 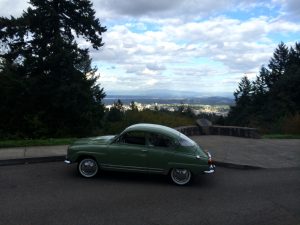 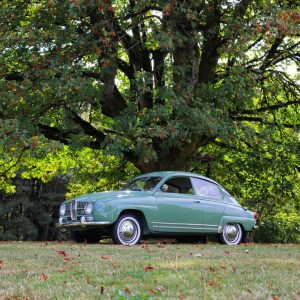 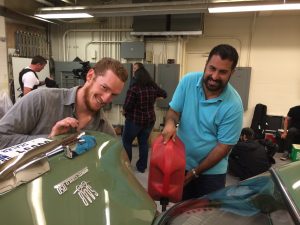 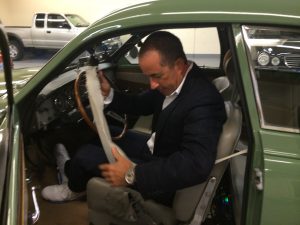 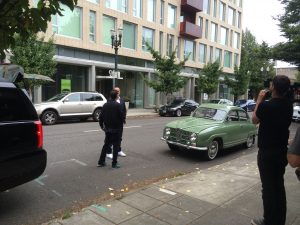 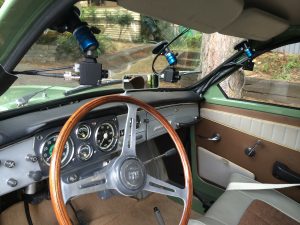 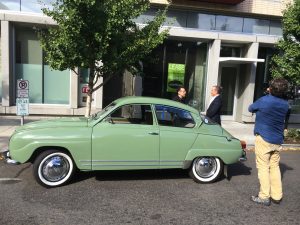 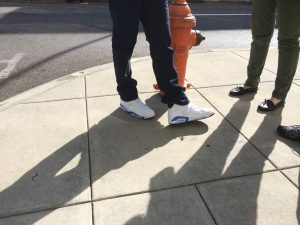 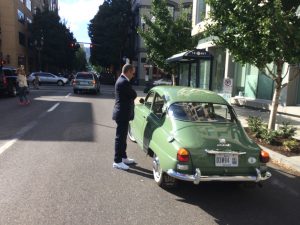 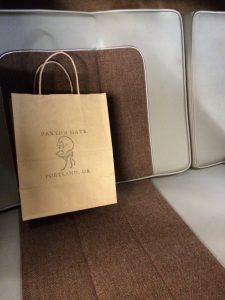 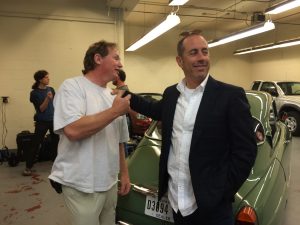 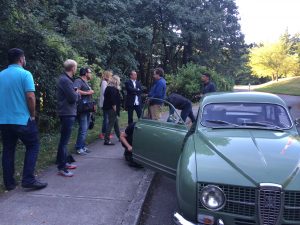 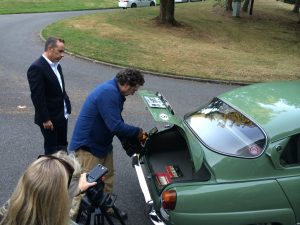 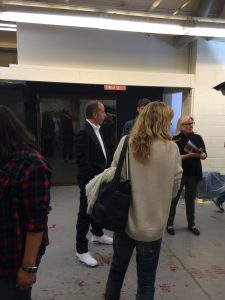 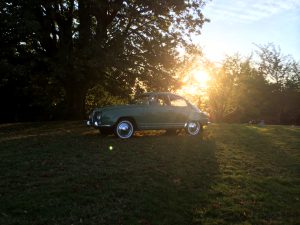 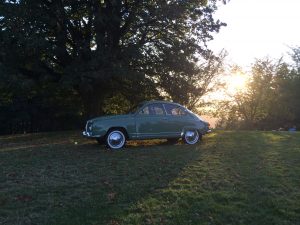 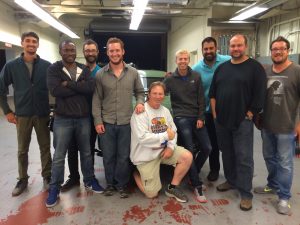 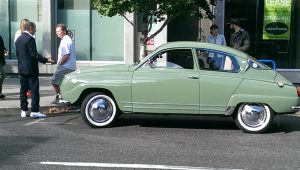 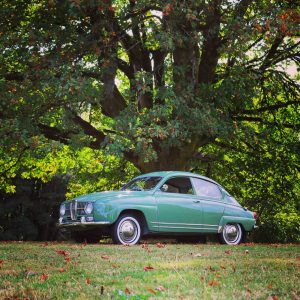 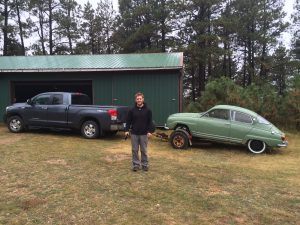 Final update on the Seinfeld “Comedians getting Coffee in Cars.”  Back home now and cars made it safely with no damage to it or the running gear from its experience.  As I suspected, on Saturday, Seinfeld took to the car like a duck on water.  We had zero issues driving it through the hilly downtown Portland.  He is a real “car guy.”

We had been told since agreeing to bring the car out, we would show up Thursday afternoon and show the crews driver how to drive the car. We would then leave the car there and he would then drive it all day Friday for all B role film.  Then he would instruct Seinfeld on Saturday how to drive the car and we would be called Saturday night or Sunday when they were through filming.  They said the closest they needed one of us was about 15 minutes from the shooting location in case they had car trouble, but we were not to be anywhere near the actual shooting. They told us at this point no car owner had ever had a chance to meet Jerry yet and we needed to have realistic expectations of our chances of meeting Jerry.

However the guy who was suppose to drive the car all day Friday for all the B roll film (same streets as Seinfeld drove Saturday but no head shots) did not do so well on our Thursday initial test drive.  He struggled mightily with the Monte and I advise them that I should drive it on Friday given Jerry wasn’t. They inform me that never happens. I’m not part of the crew or the parent company staff therefore I could not drive it either. (We had leased the car to them from Thursday night through Sunday and had no control over how it was driven or who drove it).  But calmer heads prevailed and early Friday morning I received a text message to arrive at the garage and I would be allowed to drive the car all day for all the B roll filming.  Needless to say my son Nate and I were very pleased with that news.  So Friday we got to do something people like us really never get to do which is be involved in a filming process.  Four vehicles were involved & over a dozen staff and too many cameras to count. It was amazing to see all the behind-the-scenes works and how much effort goes into what ultimately will be only a few minutes of film on TV.  Literally we drove the car from noon till 7 PM with only minor breaks in between.  The massive amount of footage they shot was mind-boggling to me and Nate.  Everything went without a hitch and they were very pleased with the outcome and said they had some incredible footage as I did things like remove the air cleaner so they could video down into the carburetor as was accelerating.

We were told Friday night we could be there Saturday for the beginning of the show but to stay completely out of sight and out of the way and we may or may not get a chance to meet Jerry.  Once again I received a text message early Saturday morning and I was to meet Jerry and instruct him how to drive the car.  When Jerry walked in and saw the car he was all smiles loved it instantly and asked to meet me and Nate right away.  We had a lot of fun talking about cars and Saabs and just seem to have a good time in general.  The entire day went without a hitch driving all through Portland picking up Fred and doing all kinds of fun stuff.  They decided to have Nate and I be in the crews’ vehicles and with tools and be ready just in case (as opposed to being 15 minutes away in her own vehicle as we’ve been told all along). Again this whole experience was amazing to be involved in the behind the scene shoot as even more vehicles and crew members showed up for the actual shoot with Jerry on Saturday.

Once they dropped Fred off the mood changed and everything became very light as a bulk of the work was done.  Now all they needed to finish was all the B roll film with Jerry driving the car.  I had multiple chances to talk with Jerry about cars and the Saabs throughout the rest of the afternoon he was very pleasant and eager to learn more about Saab cars. He reminded me he had early 80’s 900 back in the day.  As the afternoon progresses you could tell the crew became very comfortable with myself and Nate being around and we actually begin giving advice on which direction to go and what to do with the car to help make the show look better.   They had producer out of New York City had been opposed to us being involved at all and have been very resistant to anything involving me.  To her I was just one more person she had to manage. But having my son Nate around seem to help calm her and slowly as they discovered we were not “crazy people”  as some people can be around celebrities…. the mood lightened and again we were allowed unlimited access to anything we want to do.

All in all it was a great experience and we had a really good time and were blessed that the car ran perfect.  Our decision to swap carburetors on Thursday turned out to be an excellent one, as all of our hot starting issues went away and the car literally performed flawless.  This is not a car I restored.  I bought about 14 months ago so a lot of the credit goes to those restored the car and help me at the shop keep it running right.  And my son Nate for taking time out of his schedule to allow me to drive straight through otherwise we would not have made the arrival deadline.  And he was the one that had to change the rear muffler when it became plugged with a mouse nest and the carburetors for me too.

And a special thanks to all those who contacted the show and told him how hard these cars were to drive in hilly city traffic. I think those emails to the producers help to convince them to let me drive on Friday.

Here is a link from from Vsaab that was posted.  http://instagram.com/p/tdnDtRpB7n

Because Nate and I were part of the crew we are limited in what we can release for photos and videos until after the show airs.  The new season starts November 6 and they said they thought it would air fairly soon after the first date.

They also said the energy level with this car was off the charts and the highest level of enthusiasm and fun that the crew had experienced so far in the 31 prior shoots. Which says a lot for the little Saab!  To me many of the old Saabs are like that little puppy you see on the street. Everybody wants to stop and say hi and pet them. Everyone loved the car and loved the sound.  Nate and I were both amazed how many times the crewmembers have their own camera or phone out taking pictures and video of just the car. Every single one of them came up to us at some point and expressed that Jerry loved the car and they themselves thought it was one of the best cars they ever filmed

It was funny because when we were parked with the car at different times people would walk or drive by, half would recognize Jerry and say something the other half would only say, “Oh –it’s a Saab” as they went by and did not even notice Seinfeld her all the film crew. Too funny.

Thanks to all who helped.

You can watch the full episode on their website HERE

See my personal videos HERE and my pictures HERE