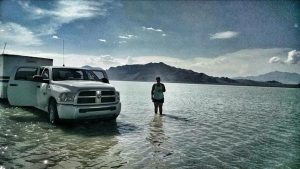 Heavy rains turned the Salt flats into “Lake Bonneville” again and forced the cancellation of Races in August.

2014 was a strange year in Deed.  It begin with the unexpected death of my salt racing friend Bertil Sollenskog the end of June.  Then the races in August were cancelled shortly after we arrived with 2 cars, Our Sonett and Bertil’s Monte Carlo.  Then again in October they were cancelled again due to wet weather at the salt.

But conditions did dry up enough the first week in September for Races to be run by the Utah Salts Flats Racing Association.  And we showed up with Bertil’s Monte Carlo to attempt to set some new records for his crew and his widow Pat.

We are very grateful for Pat to allow us to run Bertil’s car and for his crew to be there to set the new records.  It took a lot of work from many people, as you would expect from anything worth doing. 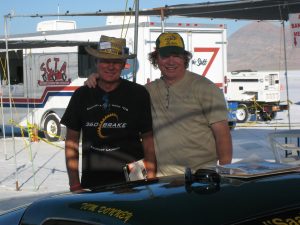 Happy times with my friend Bertil after BOTH of us set new Land Speed records at Bonneville in 2011. 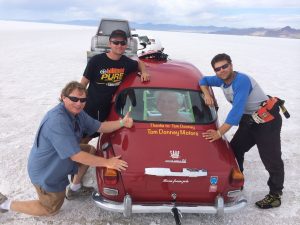 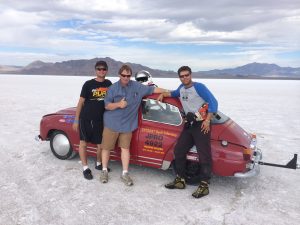 Happy Moments after we finally got Pavel his Land Speed Record in Bertil’s car at Bonneville. September 9th, 2014.  See the photo of Bertil in the rear window “riding shotgun”.  (Mike is in the black shirt)